Going deep inside the ground to detect and locate precious metals is the main goal of many metal detectors. But it should be kept clear by now that more depth is not always a good thing. Depth of the equipment is assigned in terms of ranges of the distance which starts from a few centimeters and go to many meters.

When lesser depth is considered, then more accuracy will be observed in the detection mechanism because the emphasis of the equipment would be on fewer inches of soil so more attention to detail would be given, which in this case is smaller underground metallic objects. As opposed to the situation where the equipment focuses on covering way more layers of soils underneath the surface, i.e. more depth and loses the sensitivity to detect smaller objects.

The Shape of the Object

The Density of Object

Similarly, whether an object is hollow i.e. empty from within or with large holes or dense i.e. tightly packed determines its chance of being detected by the gold detectors. Senser or fuller objects will respond to the magnetic field of detectors more strongly as compared to the hollow objects with spaces in them, making the chance of detection weaker.

The depth in metal detectors is specified in term of ranges of the distance they are known to cover within the ground. For example, if a detector has a depth specification of 2-3 meters, it means minimum it can cover 2 meters of ground with ease and maximum readings can be seen at 3 meters. All the values are although approximate and many environmental actors can alter the fact.

Time of the Buried Object

The more time an object is buried underground, the more are chances of its detection. Because the metallic components in the soil also tend to pick on the natural magnetism of that piece of precious metal, which would assist metal detectors by amplifying the impact of that piece on the detection mechanism. As opposed to when a piece is freshly dispersed items in considerable depths. Even professional level detectors perform well to older buried items than freshly buried items.

The gaps in freshly dug soil or cavities in the ground contribute as a factor in determining the depth accuracy of the equipment considered for purchase. If the ground has hollow cavities, it will behave differently and contribute negatively towards detection as opposed to the tightly packed ground in accordance with the same logic discussed in buried objects. Tightly packed particles transfer the waves more efficiently than lack of sufficient particles in the medium, which in this case is soil.

The type of soil which contains more metallic compounds in it, also known as iron-based or ferrous compounds or any other semi-precious or non-precious metals or alloys which can cause noise or alter the results of gold metal detectors. It is mostly found on high altitude plains, mountains, etc. and low depth gold detectors are more preferable.

Soil with minimal to negligible ferrous compounds is called low mineralized soil. It is mostly found on terrestrial plains, and high depth gold detectors are more preferable because the metallic noise from soil would not intervene with the results.

Gold metal detectors are designed in such a way that it is easier for them to detect precious metals like Gold and Silver rather than non-precious metals like Iron, Copper, Nickel, etc. Precious metals are denser in their build and have slightly varying chemical properties than other members of the metallic element family, which causes a different or distinguishable reaction to waves from gold detectors.

The nearby factors of the site considered to be scanned with gold detectors also play a role because of the metals in surrounding areas, in form of several pipes, wiring or building structures can cause electrical interference with the gold detectors thus manipulating the results. 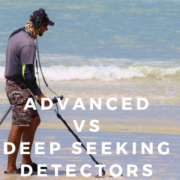